How can I say, “The End” without appearing sad or regretful?  Because I am neither! A few days ago the last animals of my beautiful menagerie left my farm.  The llamas, Stormy & Major were taken to the most beautiful place in East Tennessee to finish their lives as the perfect lawn ornaments they are.

I contacted Larry of Laurelwood – this is a beautiful property on Signal Mountain, just west of Chattanooga where wedding receptions are held.  Larry started breeding llamas in 1979 & at one point had over a hundred llamas.  His only stud, Degas still rules the roost – he was born at Laurelwood & is now 20 years old.  Stormy & Major joined the herd of about 10 females & 2 young geldings… and were greeted kindly by all!  I’m satisfied that they will be there until they take their final breath – in a place that can almost be 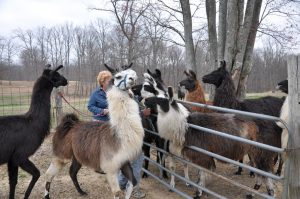 As far as goats go, the rest of my small herd, Molly the fainting goat, Annabelle & her daughter Pebbles and Sweety & her daughter Gracie were all adopted by Stephen & Tiffany – the young couple that rent my pastures to raise their young calves.  About 10 days ago, Pebbles who will be a year old next week unexpectedly gave birth to twins!  Funny thing is that she was never in the same pasture as our little stud Stinky.  The little bugger bred through the fence!  Mom & kids are doing fine!

Stephen & Tiffany have also “adopted” all the ducks & chickens!

The animals are no longer my responsibility but I continue to have the joys & pleasures of watching them every day.  I have to admit, it’s quite nice not to have to take care of them any more!  Of course we still have all of our dogs… Angel the diabetic & blind pound hound, Mouse the Bichon, Taz the Chihuahua, Diesel & Beulah the Filas & lastly, Sola the Siamese queen.

I am now the “retired” Crazy Goat Lady!  It was beautiful while it lasted, it was for me a dream come true!  I have absolutely no regrets..  now is the time to move on!  I have multitudes of wonderful memories in my mind that I will cherish – I’ll try not to focus on the ones left behind in my used checkbooks!

This journey has also brought led me to wonderful acquaintances.  I’ve met so many great people & even more via the internet.  I’ve learned & I’ve taught, I’ve laughed & I’ve cried and I’ve liked & I’ve disliked!  What an awesome experience it’s been!

I’m ready to take on my full time role as grand mother & to help our kids with theirs.  My grand daughter Cora is due in the next couple of weeks and grand child # 7 is due sometime in September.  I’m excited to begin this new journey – especially considering that I don’t have to worry about the farm while Scott & I are away being Poppy & Gramma!

Although this is most likely the last post to appear on this website, I’ll be starting fresh with a whole new subject matter.  My husband feels he’s being summoned by a higher authority & has submitted his candidacy to the permanent Diaconate.  We will know in the next few months if he’s been accepted.  In any case, I’ve decided to blog about this new & exciting journey.  Look for me soon under “DeaconsWife.com”

To all my real-life frie 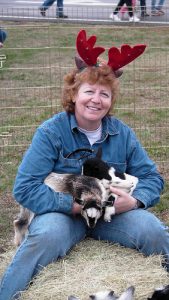 God Bless you & remember to smile to everyone you meet…

If you enjoyed this post, make sure you subscribe to my RSS feed!
This entry was posted in Personal. Bookmark the permalink.