Anyone but me would just say, “I’ve got a dairy goat & I’m milking her”.  But of course, not me… I’ve got to make a novel out of this episode of my life… so here’s my story! 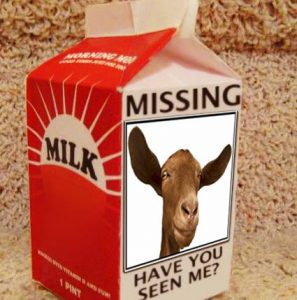 A few weeks ago our friend & priest Fr. William visited with some of his cousins from Africa.  They were amazed that I have goats as pets.  The fact that I don’t eat them or milk them was a concept they could not comprehend.  Pet goats?  What da heck for?

Gabriel explained to us that when he lived at home in Kenya, every morning before walking 5 or 6 miles to school, he had to hand milk the entire herd of about 20 goats.  Sometimes other members of the family (or families), would pitch in but it was just another chore.  Gabriel seemed nostalgic as he related that experience…

So here we are standing around watching the goats & Gabriel asked if he could milk Molly.  Her kids had left a few weeks ago & she was still bagged up pretty solid.  We put Molly in the stanchion and within a few seconds, we had a full glass of warm, frothy milk!  It all happened quite quickly.  No hand washing, no udder cleaning… just squeeze, squeeze & there it was… a full glass of creamy, fresh milk! Gabriel & Fr William thoroughly enjoyed their little treat.  I didn’t taste the milk that Molly gave us… I’m not a clean freak but that was a little too “raw” for me.  I’m sure I just imagined it but I thought there were little hairs in the milk & and maybe some dirt specs.

So that got me thinking that maybe we should “harvest” this milk so I started doing a little bit of research.   I’d found several milking systems but all I had was one little goat – I needed something simple!  That’s when I came across the Henry Milker.   This is a nice little hand made device that uses a little pump, some clear tubing, a large syringe & a Mason jar.  It’s really not worth $125 but then again, it does what it advertises & the fellow told me if I wasn’t happy with it, I could send it back for a full refund.

Poor Molly, she didn’t have a good udder to start with. She had had twins April 4th and they grew big & strong very quickly. They put quite a strain on her bag. When Easter & Lilly left for their new home when they were 8 weeks old, little Peppy realized that he could nurse from her (his mom had been sold a week after Molly’s girls had left). He’d grab a teat and hold on while she tried to “stiffly” run away (Molly is a Myotonic Fainting goat).

I first started milking her & was really enjoying the experience. Although Molly had plenty of milk, it just didn’t seem right to continue to milk her with her teats so distended. I was afraid they’d eventually “detach”. So I started shopping for a dairy goat. Research was unanimous. Saanen‘s are the best milk producers of the dairy goats.

Luckily, less than 10 minutes from here is a small dairy farm that raises Saanens. The next day after chatting with Miss Parker, I was picking up Frosty. Miss Parker & I quickly became friends and within a few days, my husband Scott & I were there learning the process of making goat milk cheese. We felt that everyone should know about this & so Scott put together a website for Miss Parker… GoatsGotMilk Although it is up and running, at this time there’s very little content. We’ll have a “For Sale” page with pictures of each doe & her registration documents. More to come on that!

For reasons only Frosty knows, her production is only about half of what she should deliver. Right now I’m getting about 1/4 gallon, twice a day. Even if this is much less that what it should be, its plenty for Scott & I. We’ve never drank so much milk before! Going from 2% cow’s milk to raw goat milk is quite the radical change but we love it!

Milking is something that must be done twice daily at a regular time. It’s a chore but one that I’ve come to look forward to. I’ve lived in the “big” city most of my life (Montreal) & I’ve had my little farm for about 3 years; still it is amazing to me to obtain this life-giving produce from one of my animals. This is so much better than raising animals for meat consumption!

Here are a couple of videos of me milking Frosty. Please note that all my jars have been thoroughly cleaned; my towels are washed & rinsed in a mixture of Dawn dish washing detergent with Clorox. The components of the milker are also washed with the same solution and so are Frosty’s teats before & after milking. She makes her own way to the stanchion and often times remains there munching even when I release her.

I empty my jar between teats – reason being is that this procedure works well by creating a vacuum.  When the jar is half full, there is less of a vacuum & it affects the speed at which the milk flows.  Note that sometimes I pronounce “teats”, “tits”… not sure how to say it – seems like everyone around here pronounces it differently.  I made the mistake of calling them “nipples” & I was kindly corrected.  But then again, Miss Parker says “Teats” & my neighbor says “Tits”.. whatever!!!

The entire milking is over within 3 minutes.  It takes me longer to prep everything, clean & put everything away than it does to actually “pull” the milk!  Naturally this video is very “matter of fact” but when it’s just Frosty & I, it’s a very therapeutic time.  For both of us!  Frosty gets her favorite food, gets her ears & chest scratched and receives some tasty “Nicker Bocker” horse treats when we’re done!

The secret to good, fresh tasting goat milk is keeping everything clean & chilling the milk as quickly as possible. I don’t have a fridge in the barn but I bring an icepack cooler with me and immediately put the jars in the cooler so they stay cool until they get to the fridge about 20 minutes later. It also helps if you don’t have a stinky buck in close vicinity! Odor in the air will quickly be absorbed by the milk.

So there you have it! I hope you’ve found this post interesting.. please let me know if you have!

If you enjoyed this post, make sure you subscribe to my RSS feed!
This entry was posted in Our Farm Animals, The Farm and tagged dairy goat, economical milking machine, goat milking, hand milker, henry milker, saanen. Bookmark the permalink.