Last Day of Winter at the Farm

Spring is just a day away & the sun has finally decided to show it’s face! Well, not for long as rain is predicted for the next few days.

In the last few weeks I’ve been quite busy answering all kinds of questions left for me in my various comments section. Not only have I helped goat owners (I think?), but I’ve also made several new online friends! Isn’t the internet an awesome media for learning stuff & networking? Just remember folks, whatever I respond is just based on my experience & research. If you have any doubts whatsoever, please contact your vet or nearest veterinary teaching university – there is usually someone there able to answer any of your farm animal related questions. 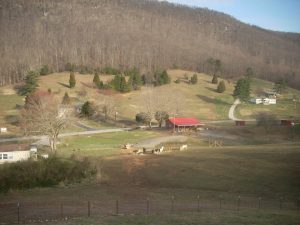 That being said, I think I’m ready for summer…While we were working in Daytona, Tim “mucked” out the barn & the outside sheds. I cleaned out the tack/feed room and my medical/first aid cabinet. I took out all of the heated buckets and replaced them with my automatic watering buckets. Just that makes everything so much simpler! All I have to do is tip them over for a quick rinse and then just let them fill by themselves!

Winter wasn’t harsh here but it did seem to last way longer than usual. Of all the animals to care for during sub zero weather the rabbits were the most time consuming. Their water bottles were not heated and so twice a day I had to replace frozen bottles. That meant I had to lug hot water from the house to melt the water nozzles! It got to be a little crazy so I found a good home for all of them… except Lattée.

Lattée has been freely roaming the barn area for more than a year. I’m amazed that she hasn’t been caught by something. This little bunny is crippled… one of her rear legs was bent when she was just a fluff puff and she just holds it crosswise under herself. But she can still run fast! Nothing can catch her! Every morning when I open the door to the barn, she’s just laying there in the middle of the barn looking like she owns the place! I hate to admit it but I have a resident barn rat that’s nearly as big as Lattée!

Speaking of rat, this thing is so brazen that it walks across the barn.. doesn’t run! So I set up a live trap to catch it to relocate it (what, me kill it? No way). Well, the next morning, there was this rat in the trap. Big one too.. Had to be at least 8 inches long, not counting the tail! I was about to put it in the truck & bring it to an abandoned barn down the road when I looked at it’s belly… wouldn’t you know it.. she had 2 rows of little buttons (nipples).. which only meant that she had babies somewhere! I couldn’t take her from her babies – so I let her go! The only damage she’s done is to dig tunnels under my feed bins. She doesn’t get into the feed but I leave bowls out for Lattée, so now I just leave out a little more. What can I say? God created barn rats too.

I sold several goats & both Glory & Coquette (who’s due to foal by the end of March). Over the last few years I had accumulated way too many animals & it seemed that my hobby had become a job. I spent so much time “working” at it that much of the pleasure of having a petting farm had disappeared. 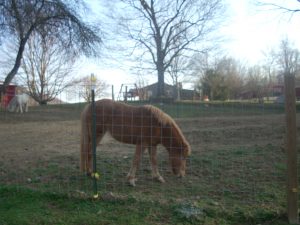 I’m still working at thinning the herd – most of my does are pregnant and are due to kid during the month of April. There is no more enjoyable time at the farm than to sit and watch the antics of a bunch of little goats! They can be so entertaining!

I think “Uncle Stormy” the llama, senses that there are babies on the way. He seems to prefer to stick around the barnyard than to roam the 8 or so acres of pasture that we have for the 3 llamas, 3 miniature horses & 2 miniature donkeys.

Still quite a bit of work to do over the next week. All the goats need to be wormed and vaccinated. As do the mini horses & donkeys. My friend, neighbor and farrier will need to come and help me trim 20 hooves. We’ll take a few days to do that… it’s really back breaking doing those little guys!

The llamas will be loaded in the trailer & brought to L & J Farm supply – I need to use his cattle scale to get an accurate weight to worm them. They’ll also need to be vaccinated. Waiting to hear from an expert as to what to vaccinate with. CD & T or horse 8-Way??? In a few weeks, Bobby the shearer will have to come by and give them their summer “make-over”. Fiber sheared & hooves trimmed. These guys need to be handled in a llama chute for this kind of work. Major’s fiber (which is high quality), will be sent to a lady that spins it and makes stuff with it.

The 3 pot belly pigs probably need to be wormed… Another use for Safeguard for horses.. just double the dosage & insert in a Twinkie! How easy is that?

Grumpy & Lulu have survived winter in their “dogloos”. As long as they had plenty of blankets to wrap around, they were fine no matter how cold it got. I got an entire new appreciation for “pig in a blanket”.. these guys really know how to wrap themselves to stay warm. You have to see this to believe it. They were totally “rolled” into their numerous blankets inside their dogloos. These animals are very smart!

My little black Cochin Bantam hen is again sitting on about a dozen eggs. The other 4 hens were laying eggs on top of her.. when I moved her into a safe hen house, she was trying to incubate about 30 eggs! Poor thing! Once she was settled in her new nest box, she sorted out the “bad eggs” and kept about a dozen. Another nest has been started in the hay feeder but none of the hens are sitting on them. If I don’t see some motherly action soon, the pigs are going to get a nice big omelet!

The ducks are ignoring the laying box I set out for them.. every day or so I pick up a large duck egg from the strangest location.. in Miss Piggy’s bowl, under the goat feeder, under the manure buggy… not the smartest animals at the farm.

Before I tackle any of the above chores, I’m going to beautify the barn. Time to remove the Fall Harvest theme (yep, never got to taking those down), and put up plastic flowers, colorful bird & butterfly decorations.. and just spruce it up!

Sound like a lot of work? Well it is but I enjoy every minute of it! If you’re in the area, drop by and lend a hand… the pay sucks but the benefits are great!

Well, enough rambling.. time to move on! Please join me on Facebook, where friends gather and share our crazy love for our critters!

If you enjoyed this post, make sure you subscribe to my RSS feed!
This entry was posted in The Farm and tagged goats, kids, pot belly pigs, Safeguard. Bookmark the permalink.