All of my farm animals are special to me but I have to admit.. my mini horses are my favorite!

I recently acquired a used pony carousel & had it “cut to size” – it was built for larger horses.  Every day (that it’s not too hot out), I work the minis on it along with Madigan, the miniature donkey.  She loves to be ridden and most kids are excited about riding a donkey!

The important thing I learned is to train a “lead” pony – one that will take control and will drive the wheel for the others to just follow.  I think Buddy will make a great lead pony and I’m working with him every day.

I might be set up at the Rhea County Fair on September 7th & 11.  If I do set up, I’ll have a special treat for the kids.  This morning I bathed Coquette – who probably had never been washed in her life!  She did very well and I managed to keep her under control providing I had treats to occupy her mind.

It’s amazing how white & soft she turned out to be!  As a 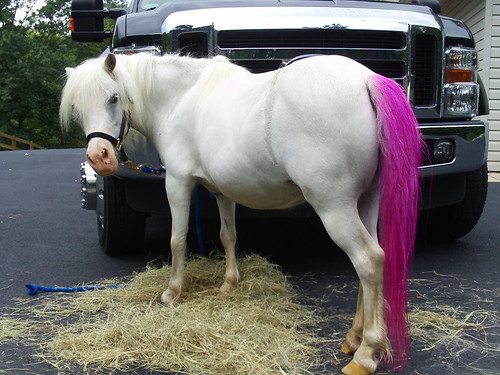 special effect, I dyed her tail pink!  I planned on doing her mane also but the weather didn’t cooperate.

Later on I bathed Buddy – he gave me a little bit of a harder time but we managed to get him nice and shiny.

Just as I was getting finished, we got hit by a huge storm!  In seconds I was wetter than Buddy!  We ran to the tool shed and stayed under cover for a bit – the rain didn’t bother Buddy at all… it was bothering me!

I managed to get his mane & tail untangled and nicely combed – he looks like a different horse!

All this time Old Blue was hanging around looking at me as if asking, “Am I next?”  I get around to her tomorrow!

Once I have every one shiny clean (it doesn’t last… Coquette rolled in the dirt before I had the gate locked behind her), we’ll work on the carousel!

I think bathing horses is a weekly chore if you want to show clean animals!

While on the subject of my 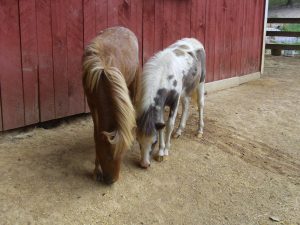 mini horses, I’ve decided to try and sell Toffee & Buttons.  If Buttons sells first, I may end up keeping Toffee – she still has a good 18 months before I can use her as a carousel pony but I think she may turn out to be a good driving pony.  We’ll see what happens!

If you enjoyed this post, make sure you subscribe to my RSS feed!
This entry was posted in Our Farm Animals and tagged miniature horses. Bookmark the permalink.

4 Responses to My adorable Mini horses