Last week I got a call from a guy looking for a home for little Pot Belly Pig he purchased at the flea market. This little girl was home raised and had never set foot in a barn! 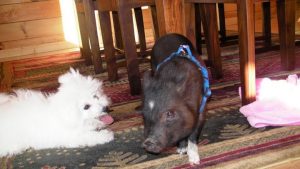 When I saw her tied with a 3 foot long wire to a post in a very dirty environment I just had to take her… even if it meant to try to find her another home later on. The fellow who had temporarily adopted her meant well but obviously regards little creatures as nothing more than something cute with which he can make a quick buck!

I brought her home to the house and introduced her to Mouse. Mouse loved her immediately (I’m not sure the feeling was mutual…)

Ms Piggy didn’t seem to be concerned with this 7 lbs fluff of white fur jumping all over the place – I think all Ms Piggy wanted was FOOD!!!

We quickly realized that Ms Piggy would have to accept being a barn animal – she probably would have made a good house pet except that Mouse couldn’t resist rolling in pig poop! That wouldn’t do! They definitely could not share Poopoo/Weewee pads!

I brought Ms Piggy to the barn where she quickly established her little routine – she loves being out and rooting and making a mess of things! The goats don’t know what to make of her and Lulu (big sow), doesn’t want her anywhere near her! As for Grumpy, I don’t think he’s even aware of a relative in his proximity!

She follows me around and loves to have her belly scratched! When you start petting/scratching her, she just falls on her side, closes her eyes and grunts happily!

I’ll try to make sure this one doesn’t follow in Lulu’s footsteps to become one mean, old, overweight, unfriendly, miserable sow!

If you enjoyed this post, make sure you subscribe to my RSS feed!
This entry was posted in Our Farm Animals. Bookmark the permalink.