After perusing my posts, I realized that I didn’t post anything about our second Llama, Little “D”.

We purchased this beautiful white gelded Llama from my friend Carol Wolf.  Little D was raised with Stormy… they came from the same farm.  We thought that Stormy ne 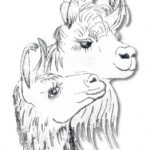 eded a companion of his sort, and he did because he & Little D hit it off right from the get-go!

This story has a sad ending… Little D needed to be sheared – he had over a year’s worth of beautiful white fiber.  However, my shearer and I couldn’t coordinate our schedules to make this happen before the weather got warmer.

On Saturday, June 27th, Little D came to me while I was washing buckets.  I knew he wanted to be hosed and I did so.  However, I should have only hosed his legs and belly but I didn’t know that.  Thinking I was doing him a favor, I hosed him until he had had enough and when he walk away, he was dripping wet.

He laid in his favorite place in the sun and just chewed his cud and looked as happy as could be! That day the temperature rose to the mid ninetys.

Around 5:00 pm I went back to the barn for evening snacks and sadly I found Little D in exactly the same spot where he was when I left him at 10:00 am that morning.  He was dead and had been for a while.. rigor mortis had set in.  There was nothing apparently wrong with him.  Stormy was standing over him, guarding him or just keeping watch, I don’t know but it sure was a sad sight.

We let Stormy mourn – he spent the evening & night by D’s side, not in the barn with his goats as he normally did.  Early Sunday morning he left D and I tied Stormy inside the barn so he wouldn’t see us carrying Little D away.  We buried him on our property…

Apparently the reason he died was because I had totally soaked him and his fiber held in all the water.  The sun shining on him overheated him and he died of heat stroke.  He just couldn’t get out of the sun fast enough.

Stormy really appeared sad.  This is something that should not have happened – it was a horrible accident & I still feel guilty about it.  Chalk it up to experience, let this be a lesson to all new Llama owners.  Don’t make the same mistake I did… shear your Llamas as soon as summer starts.  If you need to keep their fiber growing, keep your Llamas inside with plenty of fans moving the air and keeping them cool.

If you enjoyed this post, make sure you subscribe to my RSS feed!
This entry was posted in The Farm and tagged death, llama, overheating, stroke. Bookmark the permalink.