February 12th, we brought Ziggy to Danny’s of L & J Farm supply & had him undergo minor surgery. Ziggy was “banded” which is a humane & bloodless way to castrate him. The procedure is relatively simple… a strong elastic band is applied between his belly & testicles and within a few months, due to loss of blood circulation, the testicles dry and fall off.

Ziggy finally lost his little “nut bag” Wednesday April 28th! All that was left was a clean rosy circle where his testicles used to be. Now he’s really a steer!

A funny thing happened the next day. He let me approach him without any bribes (treats), and let me brush him completely! Normally I have to tie him to do this as he still doesn’t quite trust me. I removed his halter and brushed his face, neck & chin and the big little guy was in heaven! I guess that’s the product of loosing the last of his testosterone!

He’s also becoming more & more handsome. He’s shedding most of his winter coat and what’s left is very sleek & light gray. His fur is very soft and he loves being petted & brushed. If he can trust you for only 30 seconds – just long enough for him to see that you’re not going to hurt him, he becomes very appreciatative of human touch. I’m hoping that in his new frame of mind he’ll be more trusting of humans. Everyone wants to pet him & I’d love to bring him along when I set up for children but he’s still very leary of strangers.

In the above video, Ziggy was feeling pretty studly! I didn’t catch any action on this clip but he tried to mount Ol’Blue several times previously. She really didn’t care for this behavior! Hopefully he now has all that out of his system and he can concentrate on just being a pet!

Everybody, meet Ziggy our newest addtion to the petting farm! 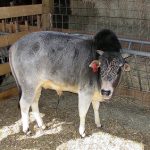 Ziggy is a miniature Zebu bull. He’s about a year old and is a little shy at this time but I believe with love and patience, he’ll become a great addition to my lot of little animals.

We picked him up late Sunday night (12/21/08). It was a cold long drive – he was in Cookeville which is about 2 hours from here. When we got there it was dark and very cold. There were no lights in the barn and I could only see him in bits & pieces with a flashlight. Bond (that was what Mary had named him), wouldn’t let me touch him but I could see the gentleness in his large eyes. He didn’t appear wild – just frightened & nervous. He’d been bottle fed but had been pastured for the last 3 months. They’d just brought him in the barn a few nights ago because of the cold front coming in.

We thought he might be a problem to load in the trailer but he just hopped in! What a good boy!

We left Ziggy in the trailer over night and Monday morning we unloaded him in his new stall. Again that went very well and he headed straight for the grain! We let him settle down and get acquainted to his surroundings.

The goats were quite curious and the Pyrenees just barked at him from Boris’ stall (the dogs are pastured with Boris). A few goats ventured in but didn’t stick around too long. However, little Java (we bought her at the same time from Mary also) our newest little Pygmy doe went right up to Ziggy and ate with him. Obviously he was familiar with her because he didn’t try to scare her away.

As a matter of fact, Java spent the day in Ziggy’s hay pile – she’d already spent the night before with the rest of the goats and as goats will be, they were not very nice to her. She’s so tiny that even my smallest doe, Boo can easily butt her and send her flying!

I’m sure both of these animals will adapt well and become popular with the children that come visit.

If you enjoyed this post, make sure you subscribe to my RSS feed!
This entry was posted in Our Farm Animals. Bookmark the permalink.