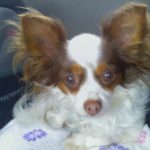 This is Murphy, our long coat Chihuahua.  We got her when she was 6 weeks old.  Actually she was my husband’s pick.

It was 1999 and all I wanted for my birthday was a black & white Chihuahua.  So I found “Lucy” and had Scott come and pay for her.  Well, he saw Murphy and decided we had to have her also.  She was Lucy’s half sister and was a bit older so she got to come home right away whereas Lucy wasn’t quite weaned yet.  Scott named her Murphy after “Murphy Brown” because although she weighed less than 1 pound, she had a lot of spunk!

Even though I loved both of my puppies, Lucy was my favorite and Murphy was just another cute puppy.  There was something about the brown eyes that just didn’t do it for me.  As a matter of fact, when we started traveling with our business, we had to consider finding homes for some of our dogs.  We lived in a motorhome and had 4 dogs traveling with us.  In October I had found the perfect home for my beloved Lucy but as much as I tried, I  couldn’t find anyone to take in Murphy!

Anyhow, when Murphy was about 3 years old, she disappeared on a cold February day in Tennessee.  I wasn’t worried about it much until dinner time when the weather got much colder.  Scott & I drove around the neighborhood a few times but couldn’t find her anywhere!  Around 8pm I got really worried and got on my knees and prayed to God that if he sent her back to me, I would keep her until the end of her life.  Well, Murphy showed up a few hours later… hungry, scared and full of burrs.  It was a very happy moment.

Later that March a fellow saw Murphy & offered me $500 for her!  Of course I couldn’t let her go.. I’d made a serious promise and she wasn’t going anywhere!

Well, several years later (promise on the back burner), 2006 a lady working for me told me that she’d gladly keep Murphy if I had thoughts of “giving her away”.  I did for a second and then remembered my promise.   The strange thing is that I had Murphy’s picture as my cell phone background and although I looked at that same picture several times a day, I never noticed anything special about it.  Until the day I told Mona that she couldn’t have Murphy.  That’s when I noticed the image in Murphy’s left ear.

The picture in the top right corner is THAT picture.  You may not see the image as it is now a copy of a copy…  but you might see it.  Look carefully – I see it.

Years went on, between 2003 & 2009 we lost Dallas, Woody & Rocky.  Three of our Chihuahuas went to Rainbow Bridge.  We felt sad for all of them – they were our babies.

A few weeks ago Murphy got a tooth abscess and was put on antibiotics.  She did well and healed.  Then this past Monday (Feb 16th), Murphy started to act sick.  Wouldn’t eat or drink… just stayed in her doggy bed.  I wasn’t alarmed until Wednesday & took her to our vet who immediately did blood work.  I don’t remember the medical term but because of the antibiotics, Murphy’s red blood cells were breaking down.  It was some sort of auto-immune deficiency – or similar to Lupus.  The vet put her on more antibiotics and steroids but he wasn’t very optimistic.  He said she’d get a lot worse before she got better.  IF she was going to get better.

Saturday morning we had to leave for Daytona for business and so I dropped Murphy at the vets to board until we returned.  I couldn’t get an update Sunday but first thing Monday I called the vet and he gave me the sad news.  Although Murphy appeared to be getting better and her red blood cell count was up, she didn’t make it.  Poor little thing died in her cage between morning and afernoon rounds.  It just broke my heart.

Although for a long time Murphy had been for me the dog that pulled my heart strings the least, she had in the last few years become my favorite.  She was the ONLY one allowed in the new house.  She got special food.  She got table scraps.  She was our “Jesus” dog.

Scott and I pray every morning before we start our busy day.  Murphy usually waited on our laps until we got to the Lord’s prayer and then she’d get all excited and would come to my face to lick me.  It’s like she understood who we were talking to.  I don’t know.  I just know that Murphy was special.  She was very needy.  She didn’t like for us to leave her with the other dogs.  She was a people dog.  Her eyes held so much expression…  she was my “Jesus” dog.  She was special enough that for me, Jesus’ face had appeared in an image of her.  I’ll always beleive that – no matter how far-fetched that may seem.

I hate it that she passed away all by herself in a cage – that I wasn’t there to hold her in her last moments.  But I know that Jesus was there… because she was special.

Murphy Girl, I love you and I’ll never replace you.  You were one extraordinary little pooch!

If you enjoyed this post, make sure you subscribe to my RSS feed!
This entry was posted in Personal and tagged Add new tag, chihuahua, Jesus Dog, Murphy. Bookmark the permalink.