Stormy, guardian of the goats

January 11th, I traded Princess the miniature mare for a Llama.  Yes, a Llama of all things!  I wasn’t sure this was a good move because of a prior experience with a mama Llama. 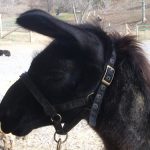 Carol from Wolf Creek Farms contacted me and suggested the trade.  Her husband had always wanted a horse and she had an extra gelded Llama that needed a good home.  She convinced me that Stormy was a good animal and had never spit or kicked anyone.  Her actual words were, “If Stormy spits on you, you must have done something to deserve it!”

Scott & I were skeptical but Carol was very confident in her Llama.  So off we went to Dandridge, TN., and proceeded with the exchange.  Carol’s husband was truly surprised as he had no clue that his daughter and wife had arranged this trade.  Stormy was Carol’s daughter’s Llama and she willingly let him go so that her dad could have a Miniature horse!  What a generous daughter!

We brought Stormy home and kept him in a private stall for a few days.  I would halter him and walk him around the pasture so that he could familiarize himself with his surroundings.  Boris & him would sniff at each other over the fence but neither one was impressed or bothered by the other.

A few days passed & I put Stormy in with Boris so they could become buddies.  Well, that didn’t work.  Boris wouldn’t let Stormy eat any hay – no matter how many piles I scattered in the pasture!  After 2 days Stormy came to the gate and “begged” me with his large black eyes to let him out.  And I did.  From that moment on, Stormy became the GUARDIAN OF THE GOATS!

I must admit, this is the most unique and gentle animal I have ever encountered.  Don’t get me wrong.  Boris is unique, Ziggy is too but there is something about Stormy that is just….mystical!

Of course I knew nothing of Llamas so I did some research.  Come to find out that although they are furry & soft and so cuddly looking with their huge eyes and long lashes… Llamas don’t care to be touched.  They are working animals and don’t have the need for human companionship or attention.  They are certainly not pets as dogs or cats are.  They just need to be fed and worked with.   Stormy comes from a loving home where Llamas are shown competitively.  However, Llamas are content to do what they’re supposed to do – for packing (hiking & carrying gear) or for guarding.

Here is why Stormy is special.  At this time I have 9 baby goats. Some nights have been very cold.  One evening I went to the barn very late (this is a great time to visit the animals – they’re in sleepy mode), and found ALL the babies cuddled around Stormy.  He looked like a big fuzzy hen with her chicks gathered all around him – sort of hidden in his long coat.  It was the most awesome sight!  Here is this huge & furry creature snuggled by teeny little baby goats.  And to top it off, Stormy looked perfectly content!

A few days ago I was in the pasture and Stormy noticed our house dogs up on the hill.  I think he’d never seen/noticed them before and he was very alarmed.  He made this unique sound and never took his eyes off of the dogs.  He stayed around the goats and just made this sound.  I learned that Llamas “hum” different sounds for different occasions.  Apparently he was “warning” the goats of imminent danger.  Of course none of the goats paid attention – they’re used to seeing those dogs on the other side of the fence but Stormy wasn’t.

Late this afternoon I witnessed something that proved how valuable Stormy is and that I should pay careful attention to what he does.  I weaned the “kids” and separated the big girls (adult does), from the teenagers (doelings) and settled them in different but adjoining pastures.  Stormy was agitated by this – probably because he didn’t have them all in the same area.

Later I went down to shut gates and noticed Stormy way up in the corner of his pasture by Chilly, one of the kids.  The closer I got, I realized that little Chilly had put her head through the fence and was stuck there.  Stormy was standing right over her and had been for at least the 10 minutes that I was busy shutting gates.

I was amazed by this!  How this creature understood the distress of another creature of a different species is beyond me!  He was just doing his “job”.  As soon as I released Chilly, she ran to the barn with Stormy right behind her.

Call it instinct, call it whatever you like… this is truly an amazing thing.  I’m telling you, Stormy is mystical All you have to do is look into his beautiful dark eyes and you’ll be spellbound!

Stormy is a great addition to my little farm.  I’m so happy that we went ahead with this trade!  I hope that John (Carol’s husband), obtains as much joy from Princess as I am from Stormy.

Oh, did I mention that Stormy came with “strings attached”?  Well, not really strings but a rooster.  Yes, a black Silkie rooster named Dr. Seuss.  This little guy didn’t make it to the show ranks.  Seems like he took 24 hours to come out of his egg (should take only a few).  Maybe because of this he developed a “kink” in his tail and not only could he not be shown but was picked on by his fellow Silkies.

Carol thought he’d make a great addition to my petting farm and he certainly does!  He is the most friendly, loving rooster you’ll ever meet!  Want to make Seuss happy?  Pick him up and put him in your coat!  He just loves it!  He actually follows me (or any human), around the barn.

Because of his feathers which are more like fur, Seuss can’t fly.  Not even a little bit.  So he can’t roost on the rafters with the other chickens.  I’ve found him snuggled with the kids under the hay trough many times.  Since he can easily be targeted at night by skunks or feral cats, I lock him up in a dog crate.  Well, wouldn’t you know it this smart little guy finds his crate and waits for me to lock him up at night!

I don’t know what Carol does to her animals but they sure are special & I’m very thankful that she chose me to love Stormy & Seuss!

If you enjoyed this post, make sure you subscribe to my RSS feed!
This entry was posted in Our Farm Animals, Petting Zoo. Bookmark the permalink.