I put off writing this post as long as I could – I wanted to start with a sad beginning and end with a very happy ending.  That wasn’t meant to be.

We had to have Rocky euthanized today.  It was not a difficult decision to make.  Rocky’s spark was gone and he was ready.  It was very sad to have to let him go but it was the right thing to do.

He wasn’t recovering from his wounds from his attack by Sheba last week.  No one saw what actually happened but thank goodness Heath’s girlfriend Kristin (cute blond in the picture), saw Sheba  (German Shepherd), pawing and growling at a pile of leaves.  Kristin checked and realized that Rocky was hurt and he was Sheba’s target.

He was rushed to the vet and had several serious injuries.  However after a night at the hospital he was returned home to rest and get better. 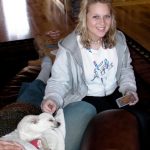 Well, I’m not going to go into details but he didn’t get better.  He had a terrible infection and his little body (he was about 4 lbs), couldn’t resist or fight back.  We had to put him down because his kidneys were severely failing and there was very little hope that he’d make a come back.

Rocky was a unique little guy.  He was better known as Rockydude, Rockstar, Houdini and mostly Shithead. He was his own little boss and answered to no one.  We got him and his little brother Taz at the same time.  They were about 6 weeks old.

Taz & Rocky were joined at the hip.  You’d never see one without the other. They never walked anywhere – they always ran, and on only 3 feet!  If one sat, the other sat.  One peed, the other peed.  If you called one, they both ran away. It took me a while to realize that to them, calling their names meant, “Let’s get out of here!”.

A few years ago our employee Julie acquired a teeny little Yorkie that she’d bring to work.  Sparky loved coming to work and Julie would get him all worked up by saying, “Wanna go see the guys”.  There were such good buds.  However, Rocky had a hidden agenda.  You could see the little snot lure Sparky in the woods and then run away from him and come back to the office without Sparky.  If you looked you could see Sparky in the woods of course looking lost & confused.  I swear at this time Rocky & Taz would mentally give each other a high five!

This past year I had started calling Rocky “Houdini”… this little snot could get out of any of our so called “secure” dog yards!  Not only was he small but he could figure out where the weakest areas of the fence was.  Taz never followed him on these escapades.

These two brothers were so entertaining.  They were always doing something, running somewhere, barking at something… always so busy they’d make you tired just watching them!

Their new favorite thing to do was to beg Peter for lap space while Peter worked at his computer.  You think Peter could resist?  Not for one minute! At any given time you could see Peter working “around” the boys!  And if you listened, you could hear Peter talk to the little guys!  They LOVED Peter!

Taz & Rocky are not your typical Chihuahuas.  They are not yippy, yappy bite your heels type of dogs.  EVERYONE loved these two!  People always told me some story of knowing someone with a Chihuahua that was so aggressive and unpleasant.  Not these two.  They were lovers, not fighters.  Well, at least Taz isn’t.  Rocky on the other hand was tough.

All the inside dogs shared a common fence with our guard dogs, Fila Brazilieros (Brazilian Mastiffs).  It appears that Rocky would say things in dog language that would really set off the Filas.  They totally hated Rocky and you could see them froth at the mouth when he would “nonchalantly” walk by their yard.  None of the other dogs created this kind of reaction with the Filas.

I could write all night about his funny antics.  One of the cutest things that Rocky would do would be to sleep on Angel.  You see, Angel (Dachshund on steriods), would lay on her belly and Rocky would lay on her back and do a balancing act.  Or sometimes he’d just lay across her neck.  He just loved soaking up body heat.
The sad thing about the relationship between the brothers is that the moment Rocky got hurt, Taz wouldn’t go anywhere near him.  I don’t know if it’s the knowledge of hurt or maybe it was that Rocky stunk so bad that Taz wasn’t quite sure who he was.  I’m sure Taz is missing him something awful because when I went to the office later today, Taz was sharing his private pillow/place with Mandy, a mixed MinPin that none of the other dogs like.  She’s just an old bitch, seriously!

He will be missed by all who shared his short little life.  But he had a very, very good dog life.  He was well fed, went where his little heart desired, had many buddies and was cute as a button!

We have a little cemetery on our property where our other two Chihuhuas, Woody & Dallas are buried.  Heath was here today when we returned from the vet and he sadly dug the hole for us.  Thank you Heath for doing that.

Thank you everyone for praying for him.  I guess God needed another faithful companion and he couldn’t have chosen a better buddy.

I love you Rocky and will miss you for a long, long time.

If you enjoyed this post, make sure you subscribe to my RSS feed!
This entry was posted in Personal and tagged chihuahua, mandy, rocky, sheba, taz. Bookmark the permalink.